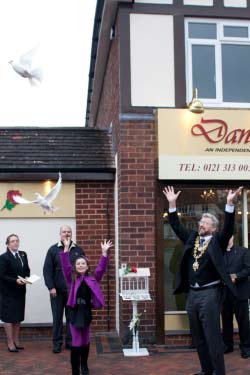 There was a lot of media coverage surrounding the opening of our brand new funeral home in Walmley, Sutton Coldfield.

There were many special guests in attendance including the Vice President of the British Institute of Funeral Directors and local clergy. A symbolic dove release marked the official opening, and then the chapels of rest were dedicated and blessed.

Based half a mile outside Walmley village centre, the funeral home has a large frontage and enjoys a prime corner position.  Major refurbishment involved taking the building back to a shell and then reconfiguring the space to create a large reception, arranging room, general office, preparation area and mortuary.  The premises also have two chapels, the larger of which is capable of being used for a small funeral service accommodating up to 20 people.  The room can also be partitioned to create two smaller viewing chapels.

Owner, Sarah Wolsey, a qualified and licensed Funeral Director,  is passionate about achieving and upholding the highest standards.  She says: “I think the industry should be regulated.  For us, there was never any question about Daniel Ross Funerals seeking membership of the National Association of Funeral Directors.  To my mind, the fact that we are expected to abide by a Code of Practice and that we provide a formal complaints/redress system shows families we are committed to doing the job to the best of our ability. We are also proud to announce that we are also members of the Society of Allied and Independent Funeral Directors and the Association of Green Funeral Directors.”

See more
We use cookies to ensure that we give you the best experience on our website. If you continue to use this site we will assume that you are happy with it.Accept & close