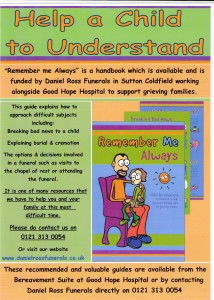 Daniel Ross Funeral Directors, based in Walmley, Sutton Coldfield are proud to be working alongside Good Hope Hospital in Sutton Coldfield by funding and making available a bereavement guide called “Remember Me Always” which is specifically aimed to help parents support their children when a death has occured within the family.

It is estimated that 85% of funerals have a child touch point where the loss may be a grandparent, aunt/uncle, family friend, or more tragically a parent or sibling.

The guide is wrote by bereavement child experts but it’s publication funded by Daniel Ross Funeral Directors in Sutton Coldfield who are accredited members of The National Association of Funeral Directors.

Daniel, owner of the independent family run funeral directors, says ” At a time when families are trying to come to terms with the loss of a loved one, this guide has proved to be a lifeline for parents attempting to meet the needs of their remaining family”

A Macmillan nurse, comments “Whilst working as a Macmillan nurse, I longed for a book which gave information to families when there was an expected or actual death in the family. I feel this book is practical, accessible and easy to read and will meet the need of these families by providing guidance on breaking bad news to children, children and funerals, how children react to the death of someone close to them and other important subjects”

Daniel Ross Funerals in Sutton Coldfield, prove their commitment to the local community by making these most valuable guides accessible at Good Hope Hospital, following a bereavement. The caring family business provide these guides as standard to the families that they serve and is just one of the many resources that they have to help their families at their time of need.

Daniel Ross Funerals operate a 24 hour, 7 days a week,  support and emergency service on 0121 313 0054 and their funeral home is based in Sutton Coldfield, near to Good Hope hospital.

Walmley residents can celebrate the British summertime in traditional style this weekend, with cream teas and English strawberries at the Annual Garden Party at St John’s Church.

The Walmley based funeral directors on the Eachelhurst Road, Walmley, Sutton Coldfield will also be donating commemorative items to help raise money for St John’s Church. Cash from the sale of the engraved memorials will go towards a holiday for members of the Bereavement and Support Groups at the church.

The memorials are small items that have messages on them such as “In loving memory of Grandma” and can be placed on gravesides as a lasting tribute or in the garden at home in remembrance of a loved one.

St John’s Church Centre Manager, Mr Gordon Ward is hoping many people will attend and support the community: “With the wonderful weather we’ve been having we’re hoping the Garden Party will be a huge success and we’re delighted to be working with Daniel Ross Funerals.

The garden party takes place on Saturday July 3rd at St John’s Church between 11am and 3pm and all are welcome.

More news on Daniel Ross Funerals within the local community can be found on their website www.danielrossfunerals.co.uk.

Campaign to help Bereaved Schoolchildren in the West Midlands

BREAKING bad news to children is never easy, but now West Midlands schools have been given a helping hand to make sure staff are saying the “right words.”

Daniel Ross Funerals of  Walmley, Sutton Coldfield has taken its recently-launched Child Bereavement Support Campaign to the next level, by funding and making available new handbooks to support and guide people working in schools and other educational environments.

The user-friendly school handbook follows hot on the heels of a successful version for parents and carers, which was released in February (2010) by the Eachelhurst Road business.

Local schools have been told about the handbooks and complimentary copies have been made available. Posters have also been designed.

One of the schools to receive the booklet is St Edmund Campion School in Erdington, Jan Fleming is the secondary schools Bereavement Co-Ordinator: “Over the last five years at St Edmund Campion School I have set up and managed a Bereavement Profile and supported all the pupils and families who have suffered a bereavement which has been well received by pupils and their parents. The booklets that I have just received from Daniel Ross Funerals , particularly “Remember Me” will be invaluable in helping me continue the support given to the families in our school community. They are directed at the specific needs of the child at what is a most difficult time for them, not only to support them but will be invaluable source of information for their families in helping their child cope with their loss.”

Topics covered include: telling children when a member of the school dies, informing staff when a member of the school dies; issues relating to loss for children in early years classes,loss issues for those with special needs  and how to handle the situation when a bereaved child or colleague returns to school. The handbook also covers faith and cultural beliefs and considerations and critical incident contingency planning

Posters were supplied for use at each school’s own discretion, in case staff decided they wanted to further publicise the handbooks for parents and carers.

“I have always personally believed there is a need for extra help and support for those caring for children following  bereavement,” said Sarah.

She said the response to the campaign had been “totally overwhelming”, firstly from parents and now from teachers and teaching assistants.

“It is so positive and encouraging for parents to know that the care and support given at home is being continued and followed through whilst the child is at school. It is wonderful to have everyone pulling in the same direction,”  added Sarah.

“Daniel Ross Funerals is a family-owned-and-managed business which is proud to have funded these books and made them freely available to our local community.  It’s all about the people.”

Copies of both guides – the teachers’ resource or parents’ handbook – along with the poster, are available from the business. Simply visit the website: www.danielrossfunerals.co.uk or call its 24-hour telephone helpline on: 0121 313 0054.

Our Funeral Home, Grace Mary House,  was purposely and sensitively designed to serve you in your time of need, and sets the standard for other Sutton Coldfield funeral homes to follow. 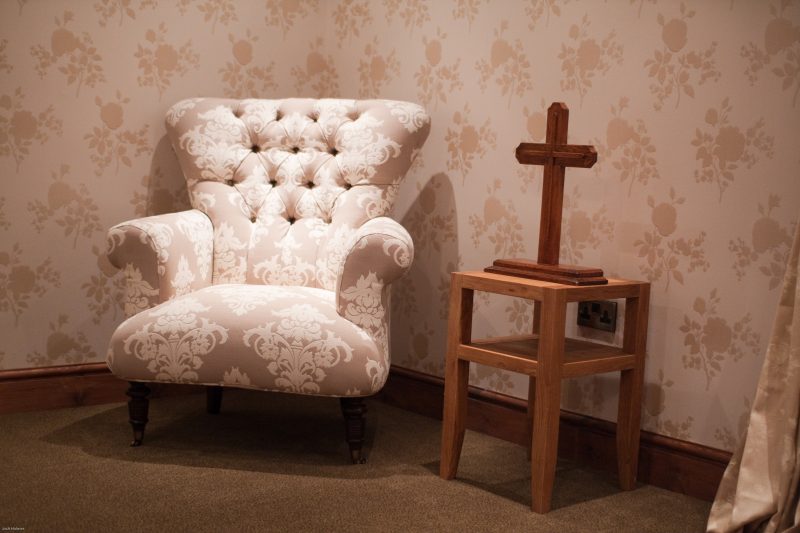 Our facilities here include a beautifully furnished reception area, private arranging room in which to discuss funeral details, dedicated private Chapels of Rest to visit your loved one and a large chapel which may be used for the funeral service itself for a Memorial service or evening private family visiting reception.

Many people have told us that one of the most important things we need to do is listen.  This is easier to do in private and it’s what we do well.

Our light decor has been done for a reason. Mentally and physiologically people feel more comfortable surrounded by light colours, and, whilst visiting a funeral home can be upsetting, we have tried to make the environment as relaxing as possible.