At Daniel Ross Funerals in Sutton Coldfield, we are honoured to be able to offer personalised football funerals so that families are able to give their loved one a truly befitting tribute and a funeral to remember.

Popular football funerals include football themed coffins decorated in Premier League club colours or bearing club crests, floral tributes, decorating the funeral vehicles and making a final journey to the football ground prior to the funeral.

Daniel Ross Funerals always ensure that any permission regarding copyright images are obtained from the individual football club. We have previously supplied coffins and themed football funerals for the fans of Birmingham City, Aston Villa, Manchester United and Liverpool FC.

At our funeral home in Walmley, Sutton Coldfield, we have more information and ideas to create the perfect send off and football funeral for your loved one.

A funeral should be as individual and unique as the person who has died and there are families who choose the funeral to be a celebration of the life that has been lived and wish to portray often an outgoing and colourful character or maybe, a real music lover with a jazz band for a funeral service.

Daniel Ross Funerals are proud to work alongside a traditional four piece jazz quartet (comprising of Trumpet, Trombone, Banjo and French Horn) who are able to play a medley of traditional jazz music such as “When the Saints go marching in…..”  and  “Down by the Riverside…..”  (to name but a couple) as the funeral cortege arrives and leaves the home address and on arrival at the Crematorium or Cemetery.

In addition, the quartet are only to happy to meet any specific or unusual requirements.

For further information and pricing on a jazz band for a funeral service, please do not hesitate to contact us.

Here at our funeral home, Grace Mary House, we are able to offer our families a private and intimate chapel for a funeral service. Many families choose for the funeral service to be a small private affair therefore our facilities here at Daniel Ross Funerals have proved invaluable as we are the only funeral directors able to offer a chapel in Sutton Coldfield to such high standards. 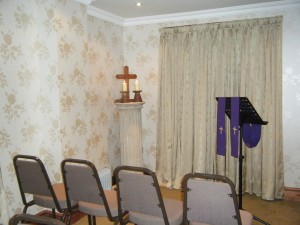 Our Chapel has received both blessing and dedication for all religions and can comfortably seat up to 16 mourners or family members. In addition, there is ample room for the coffin to rest within the Chapel alongside the lectern which is the stand from which the officiating minister/priest/funeral celebrant would take the funeral service from. 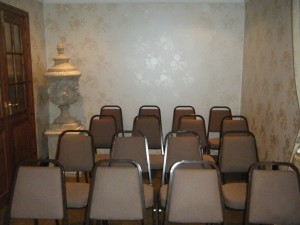 Our Chapel has been also used to take non religious services, as we are able to personalise the Chapel with religious symbols for each denomination or with more personal items such as photographs or family pictures. Our Chapel also has the facility to have CD music played and/or piped music to sing hymns to. Should a family prefer to have a live organist or soloist at the funeral service, this also can be arranged.

For those who have previously served, Daniel Ross Funerals in Sutton Coldfield, West Midlands, is proud to offer a military funeral service that reflects the right amount of military input that the family would like, ranging from simply draping the coffin with a suitable flag , right through to a uniformed chaplain, relevant flag on the altar, regimental prayers, Last Post and the deceased’s medals displayed on the coffin. Military funeral music can also be played, eg a Regimental March etc.  Ex-members of the Royal Navy often have a version of “For those in peril on the sea” sung as a hymn, adapted for use at funerals by a local Navy Training Corps Chaplain who works closely with us in Sutton Coldfield.

At a Military Funeral, for members of the  Royal Navy – the White Ensign  is used,

At a Military Funeral, for the army the Union Flag is generally used,

At a Military Funeral, for the Royal Air Force the RAF standard,

For folk who have served in the Merchant Navy then the Red Ensign is used.

The British Legion is normally available to send volunteer members as a Guard of Honour, along with a standard bearer who will normally “dip” for Last Post. The Commemoration (We shall grow not old…”) can also be recited by one of their members or the Chaplain.  For those not in the British Legion a nominal donation should be made to the Branch from which the members attending are associated.  These are things we can easily arrange through our local contacts with the various ex-servicemen’s association, eg The British Legion, Normandy Veterans Association, National Ex Services Association, Royal Naval Association and the Royal Air Force Association.

Generally these forms of services apply to ex-serviceman from the Second World War, although not exclusively, and it is recognised that due to the experiences they had during those dark times there are some who do not want any military style input. But for the greater majority their families are keen to honour the memory of what their loved one did for King and Country and therefore include a degree of military input.

Not all family want a “religious style” service and so we also offer a non-religious form of service that again can contain any amount of military style input that the family request.

Although the funeral service is a farewell to the deceased, it is also, importantly, for the families as well and having a military style feel to it, where appropriate, so often gives great satisfaction to families and friends as the memory of their loved one is honoured in this way.

At Daniel Ross Funerals, we would be honoured to serve and your family and to deliver a personal military funeral in Sutton Coldfield.

See more
We use cookies to ensure that we give you the best experience on our website. If you continue to use this site we will assume that you are happy with it.Accept & close